The Africa Museum displays African collection of Dr Endre Nagy and introduces animals and animal groups to the public. The Safari Park offers a collection of exotic animals.

In 1958 after his three collect journeys to Africa Endre Nagy left Europe and settled down in Tanzania, where he was a collector and he caught wild animals. So he could maintain himself.

After some years he became one of the most well-known white hunters of the country, he founded zoos and game reserves. He wanted to transform the African hunting culture after the European one on the hunting grounds of Kilimanjaro and Volcano Meru. There he was the chief of the hunters too.

He was one of the originators of the Hunting exhibition in Bu- dapest in 1971 and he was the chief of the Tanzanian pavilion.

In 1984 he brought the great part of his collection to Balatonederics into the family home. Since then it is a museum sur- rounded by living animals.

He took the initiative of bringing home of the Winisch-Graetz collection from Kenya, which was placed in the Festetics castle in Keszthely.

He was a member of several hunters associations; he was the president of the Bloodhound and greyhound association. He was rewarded several times: he got the Star-order of the Hungarian Republic (1986), he was given the title of doctor honoris causa at the Agricultural University in Keszthely and he got a postumus honor: the golden degree of the Hubertus crosses.

Since his death his second wife has brought the Africa Museum into motion and she makes it larger and larger. She makes it according to his husband’s plans. Now the Museum is surrounded by exotic animals. All the people can make acquaintance with a small piece of Africa here on the shore of the Hungarian sea and can take a view of the trophies and relicts of a great Africa-hunter. 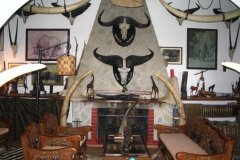 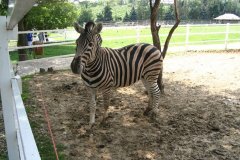 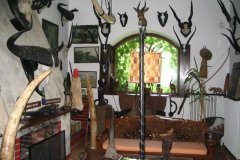 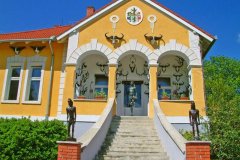