The Tapolca-basin revealing from the Szépkilátó, the Szent György-hill, Szigliget, the basalt organs from Badacsony, the charming view of Balatongyörök makes everybody to stay.

Balatongyörök and the surroundigs is one of the most beautiful part of the Balaton region. It wasn’t accidental, the Romans settled down at this place, creating and estabilishing their bathing culture.

The village is borded by the Keszthely yand Szigliget bay. The village was inhabited in the prehistoric age as well, as the founded archeological findings prove it. The archeoligist found here stone hatchet from the stone age and copper axe from the 3rd century B.C. They found roman settlement and bath relics from the 3rd century A.C. from several hundred meters of the Balaton lake, next to the Szépkilátó. The middle age village was built to the relics of the roman age settlement. The name of the village was mentioned first in the founder letter of the Almádi Abbey (nowdays Monostorapáti) from 1121. It’s naming probably comes from Gyürk, the son of the voivode of Szigliget (II. Atyus voivode).

The village remained relatively in safety during the Turk era. We can hear about the village as Meszes Györök in 1969. This name comes due to the inhabitants who, next to fishing, handled with lime burning. The village get to the property of the Festetics family in 1734.

On the beginning of the 20th century the village changed. Bathers appeared here in these days, the railway was constructed in 1902 and after five years the beach was finished as well. The basic area for the beach was donated by II. Festetics Tasziló, but he kept his proprietary rights. The landscaping of the beach get started in 1910 and Lady Hamilton, Festetics Tasziló’s wife planted the planes in these years too. The village get his name, Balatongyörök in these times

The bath camp was pronounced as a holiday resort in 1920 and the pier was constructed in 1932. 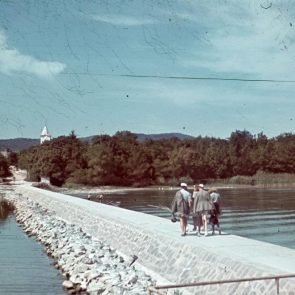 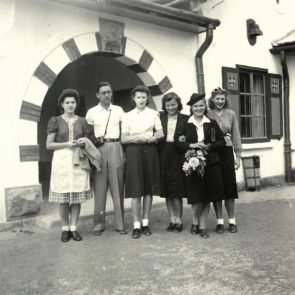 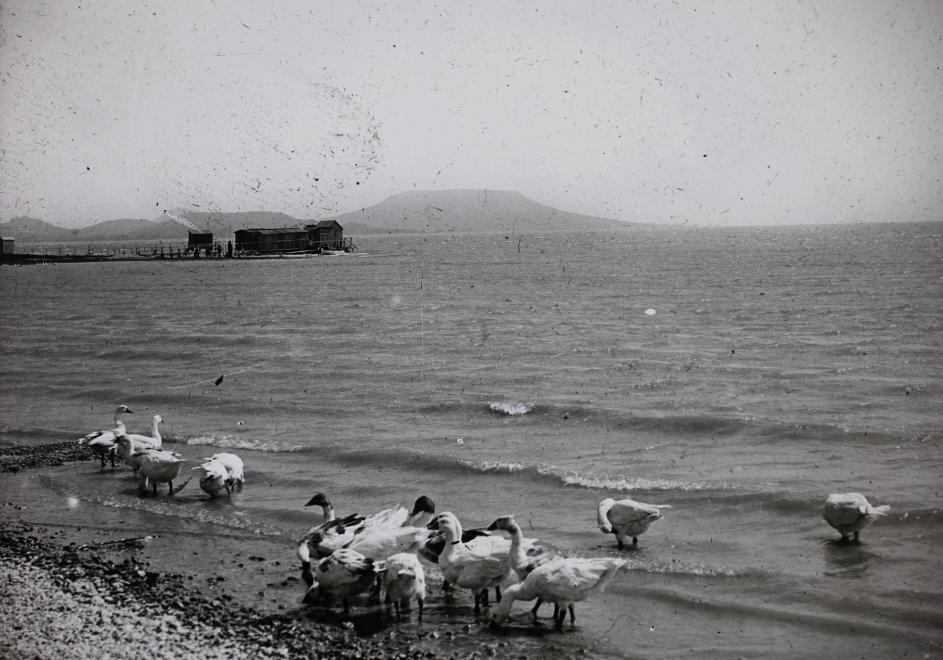 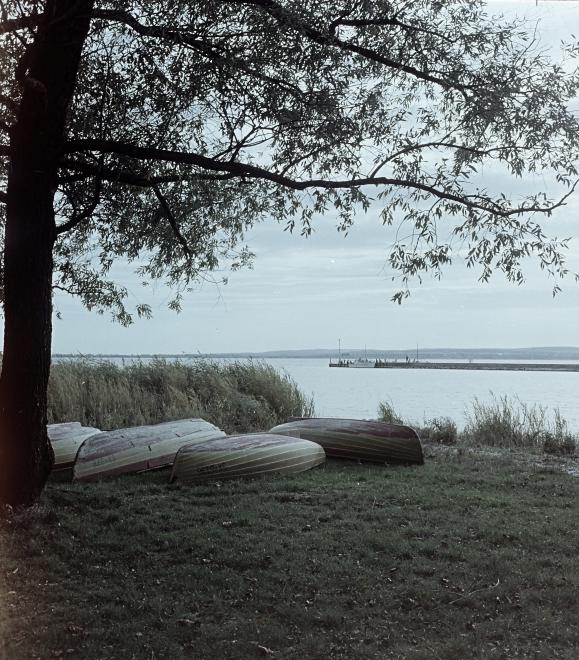 The village stand once from one street began to develop thanks to the beach. A separated parish building, new streets came into life and new villas were built.  The village won the Prix d’Honneur in 1990, an award donated to the most beautiful european village. 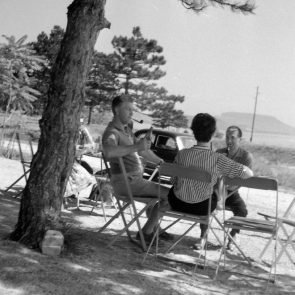 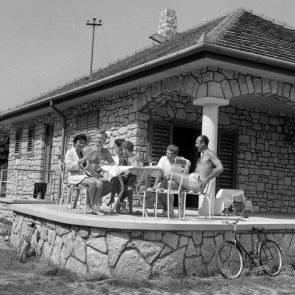 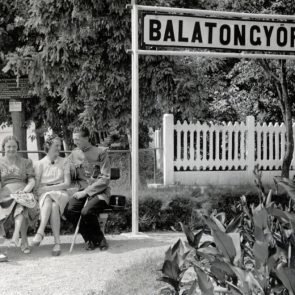 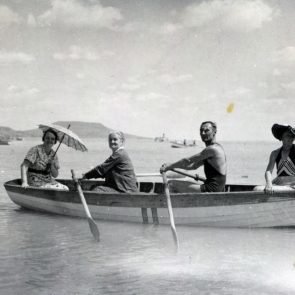 Approaching of our village, vehicular informations

Balatongyörök can be easily approached from Budapest (200 km) on the highway M7, driving down at the exit lane, heading to Keszthely. From Keszthely heading to Tapolca on the road 71, 9 km from  Keszthely, after the villages of Gyenesdiás and Vonyarcvashegy. From the direction of Sopron on the road  84 (128 km). Distances of further big cities by car: Győr 159 km, Wien 180 km, Graz 160 km, Slovenian border 80 km, Tapolca 19 km, Sümeg 27 km, Szombathely 98 km, Veszprém 68 km, Pécs 207 km.

The most of the overland buses has a bus stop at Balatongyörök. Buses from Budapest, travelling on the North coast and buses travelling to Tapolca, Szigliget, Veszprém and Székesfehérvár has stations at Balatongyörök. You can travel to Keszthely by overland buses and local lines, the last ones are hiting the center and they also depart from there.We can travel to Hévíz and Zalaegerszeg by trough line. More informations and prices at www.menetrendek.hu.

The village has two train stations, the central station is directly next to the main entrance of the beach. The box office is working only at summer. 90% of these trains stops at Balatongyörök, only the InterCity lines don’t stop here. We can travel directly to Tapolca, Sümeg, Celldömölk, to the other direction to Keszthely, Balatonszentgyörgy and Pécs. More informations at www.mav-start.hu.

The Balatoni Hajózási Zrt. circulates regular boat lines hiting the port of Balatongyörök in the main season. We can travel directly to Badacsony, Szigliget, Keszthely and to the other little locations. More informations at www.balatonihajozas.hu.

The Fly Balaton airport is on Sármellék, at a distance of 22 km from Balatongyörök. Planes arrive from many different european countries. If you want, you can rent a car on the airport. More informations at www.flybalaton.com.

Balatongyörök is the birth place of several hungarian authors.

His words depict in the nicest way the beauty of Balatongyörök’s landscape: „When we arrive in the direction of Meszes Györök, where the road turns to the North, the sun was preparing to set. It poured out it’s beams for all one is worth to the landscpe laying before us but the beams started to gleam yellow and to turn red.  And the light of the beams turning red opened up a landscape before me that alike a genius never constructed. Neither dreamt…”

„I will never forget the moment when I saw this,fairyland.”

He wrote a sociography titled “A Balatoni évtizedek” from what the reader can get acquainted with the life of Balatongyörök between 1950 and 1955. Among others he writes this in his writing: “You can see most beautiful Balaton panorama from Balatongyörök. From the side of the hill, looking to the water unfolds such a panorama, which matches with the view of the Neapolitan bay.”

Dénes Kiss, Károly Szakonyi, Tibor Tüskés and Ákos Kertész visited the writer in his house in Balatongyörök. He was working as a cultural columnist at the Esti Napló and at the Dunántúli Napló from 1960, but he edited the prose column of the Jelenkor. He was the executive editor of the Új Írás and the Élet és Irodalom between 1971and 1974. Awards: József Attila-, Gábor Andor-, Füst Milán-, Táncsics Mihály-award. The culture house of Balatongyörök wears his name in honour of him.

He were in Balatongyörök as a young poet and he wrote poems about his experiences titled as “Györöki halászok”.

He bougth a vineyard on Becehegy in 1956. He spent mostly his summers here, and he composed in his house which turned into a writer workshop. He perpetuated the beauty of Balatongyörök in several poems, but he wrote also about his estate, winecellar and about the viticulture and houseworks.  His poetry inspired by tthe Becehegy is very colourful. Poets, writers and artists visited him on his estate, among others: Ferenc Jankovicz poet, Tamás Bárány writer, András Laczkó writer, József Fodor and Jenő Kenessey composers. They also mention the beauty of the country in their writings and the viticulture work of Gyula Takáts.

He publicated his book “A Balaton elrablása” in 1996. The story is not about the landscape but about a sad happening. About the sad happening that how a big entrepreneur took away and fill upp 2000 quadratmeters from the Balaton.

The Kossuth awarded singer bought a house in Petőfi street and a vineyard on Becehegy. He reckoned the village as his second home. For the first anniversary of the world-famous tenorist’s death a Friendly Society was formed on the village in 1997 with the aim of tending the artist’s memory. After this a Simándy Memorial Night is organized every year.

The painter had a bungalow in the village. The landscape, the silence and the possibility of resting attrected him here.

He was born here, he spent his childhood on the Becehegy, from where he moved to the village later. He created his own atelier in his house. Anyone could admire his prominent graphics on the summer exhibitions.

The director of the Fine Arts Museum lived in Balatongyörök. He was almost a constant opener of the exhibitions of Balatongyörök.

The Actor of tha NAtion spent almost every summer in Balatongyörök.

He took part regulary on events and season openings.

He lived in Balatongyörök from the II. World War during his death.

He painted frequently on the Becehegy. His paintings made here are well- known, they represents the landscape and the almond trees.

A well-known Africa explorer who lived in Balatongyörök since the end of the ’50s.

Balatongyörök was his love since 1947 till his death. His pictures were a reflection of this too, he made his pictures about the landscape, people and the lake for more than 40 years. The municipality organized a seasonal exibition from his pictures in 2004.